What a fantastic first day!

There are two prominent things which sets this day apart but first let me tell you something about the starting journey.

So we reached Bangalore at 8:00 AM, got down at what seemed to be the middle of the road, searched on Google maps for the actual location of our destination hotel and finally called Uber to reach there. Hotel room is okayish. It's at the 5th floor and the lift is quite narrow. Once I reached the room, I freshened myself and got ready to have brunch. 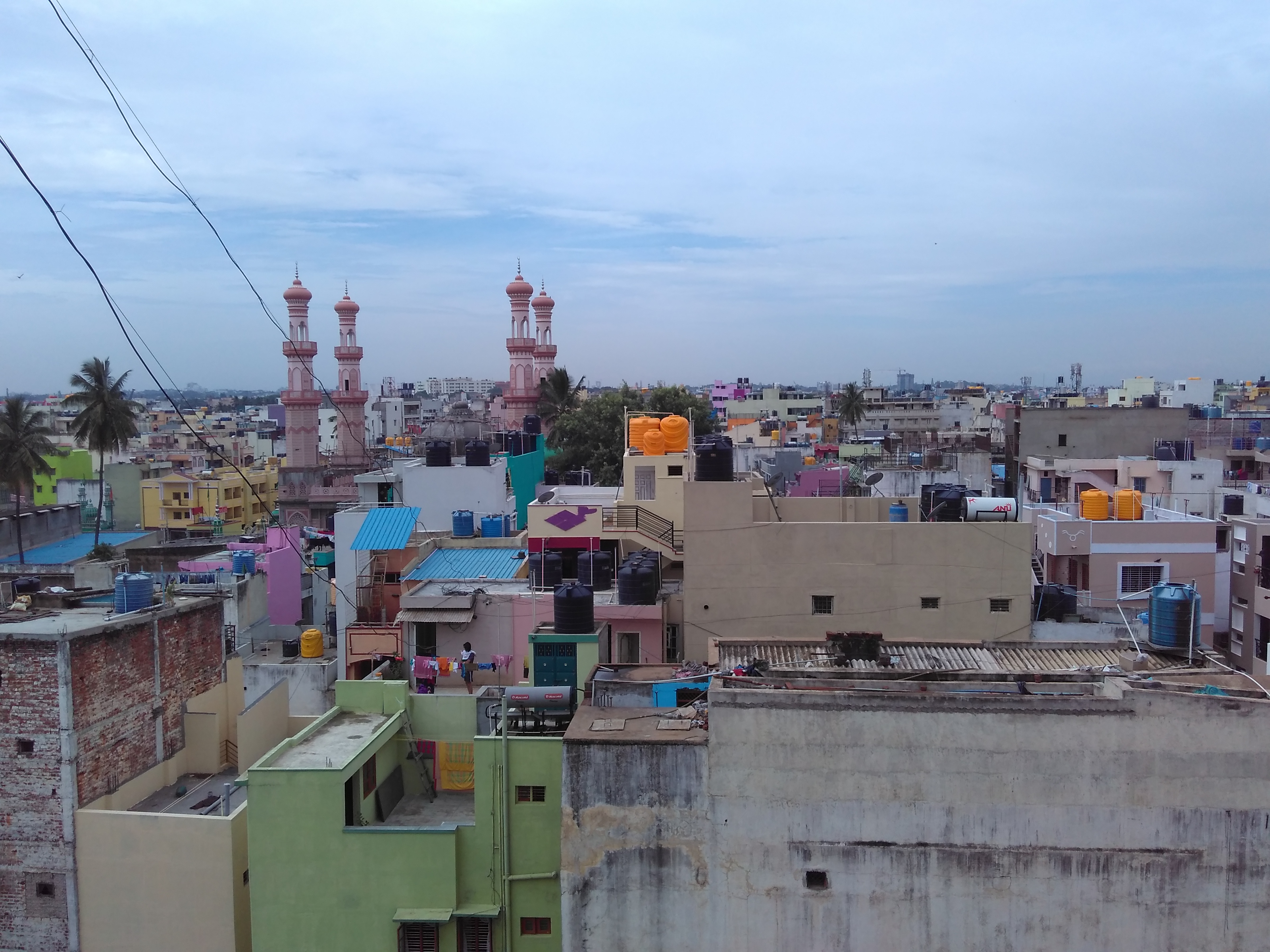 View from our hotel room

We hunted down the nearest nice place to eat and found a mall nearby at around 2.5km. We walked till there, which was a nice workout in relatively stinky areas of Bangalore. It was a medium sized mall. We directly started our hunt on the food court after reaching there. Lot of rounds around, we finally decided to go our own way and eat whatever we want, later to meet at the specified place.

I went to Mcdonals with my friend and as usual had a nice burger there. The other two joined us there itself. After the so-called "meal", we thought of taking a metro back to our hotel. It had a metro station nearby. But we came to know the this line has no connection with the line we wanted to take the metro for. Anyway when we came out of the station, we immediately got a bus and came back to the hotel.

And it was just a start. I wanted to roam around this wonderful city and so I searched about the places to visit in Bangalore. The nearest one and certainly worthy was Visvesvaraya Industrial and Technological Museum just 4km away from our place.

Talking about the museum, it's so extensively built that you can't even roam around it completely in a day unless you reach just at its opening time and leave when it closes. We could only visit the first two floors. On the ground floor, they had mere introductions and belongings-showcase of the items concerned with Dr. Visvesvaraya after whom it has been named. I took a lot of pictures and videos to keep an account. 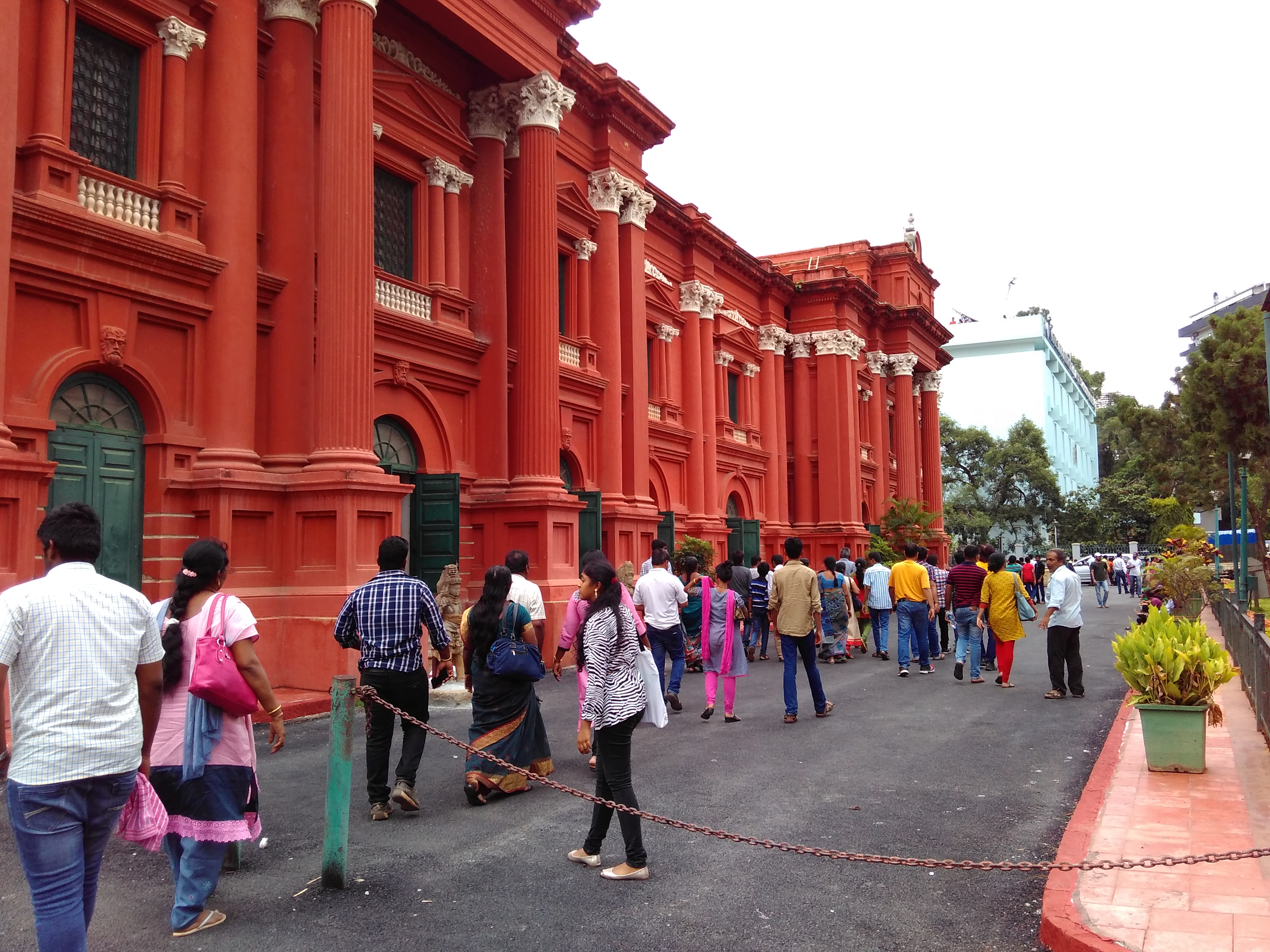 Way to the museum 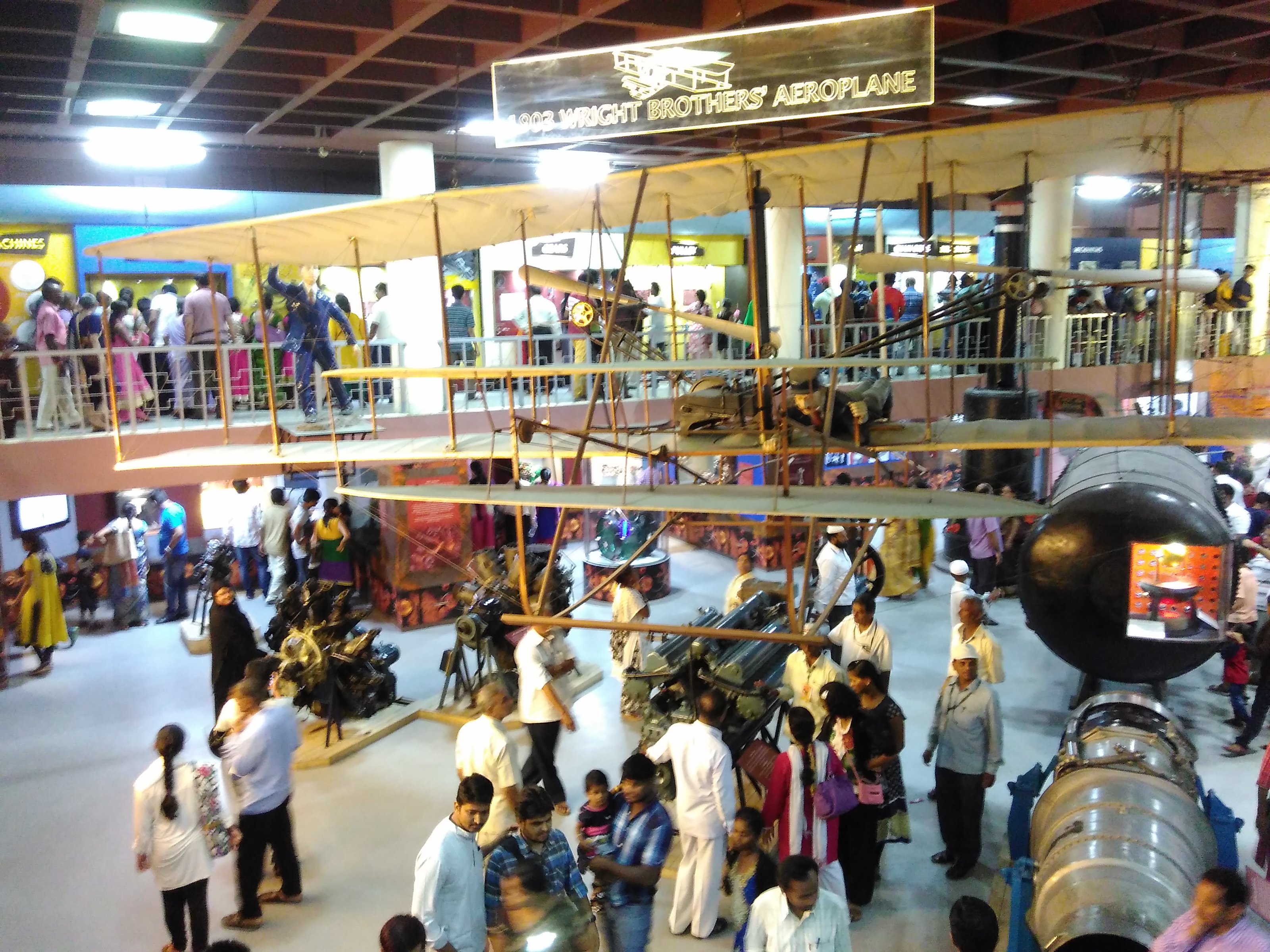 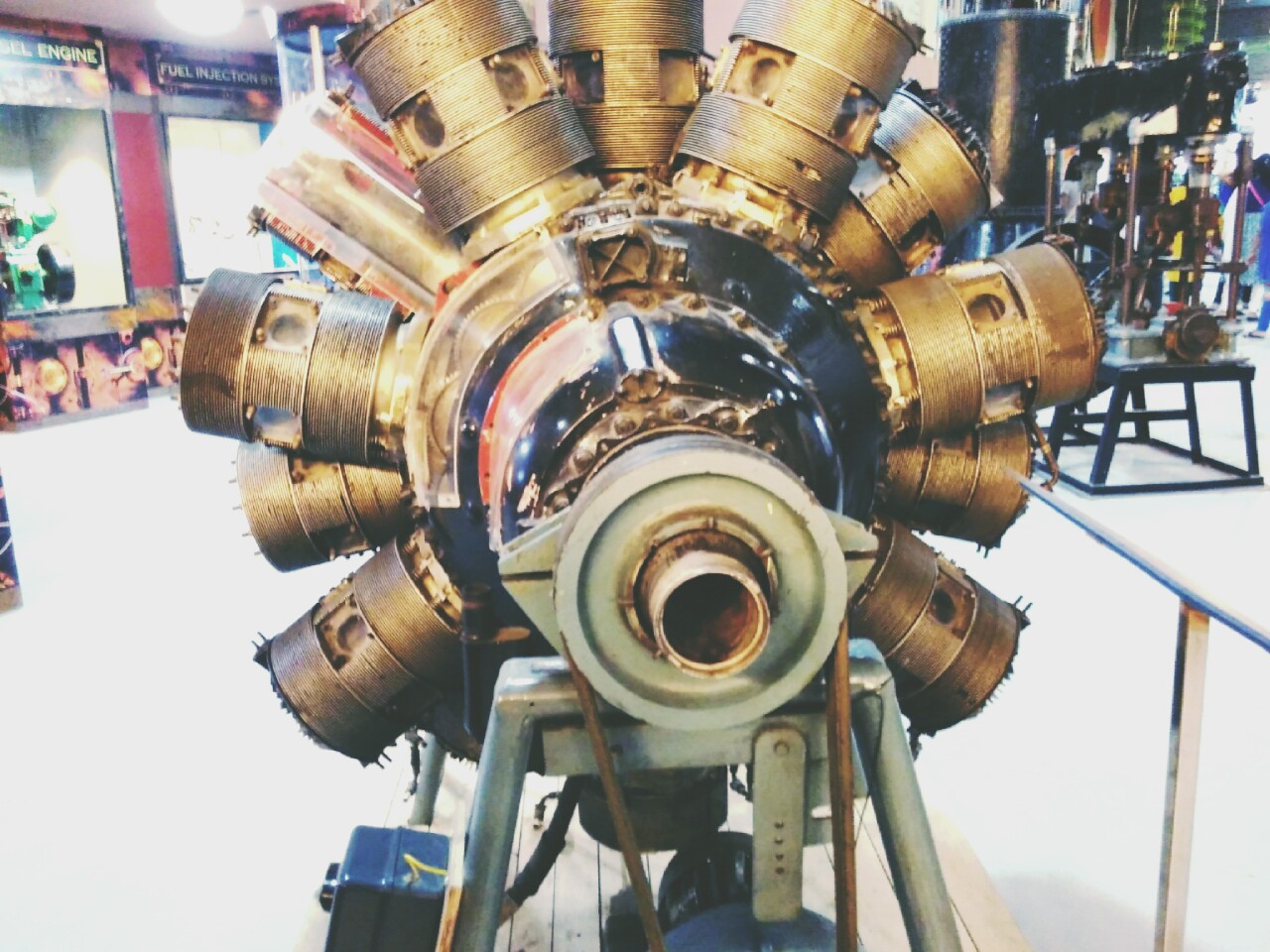 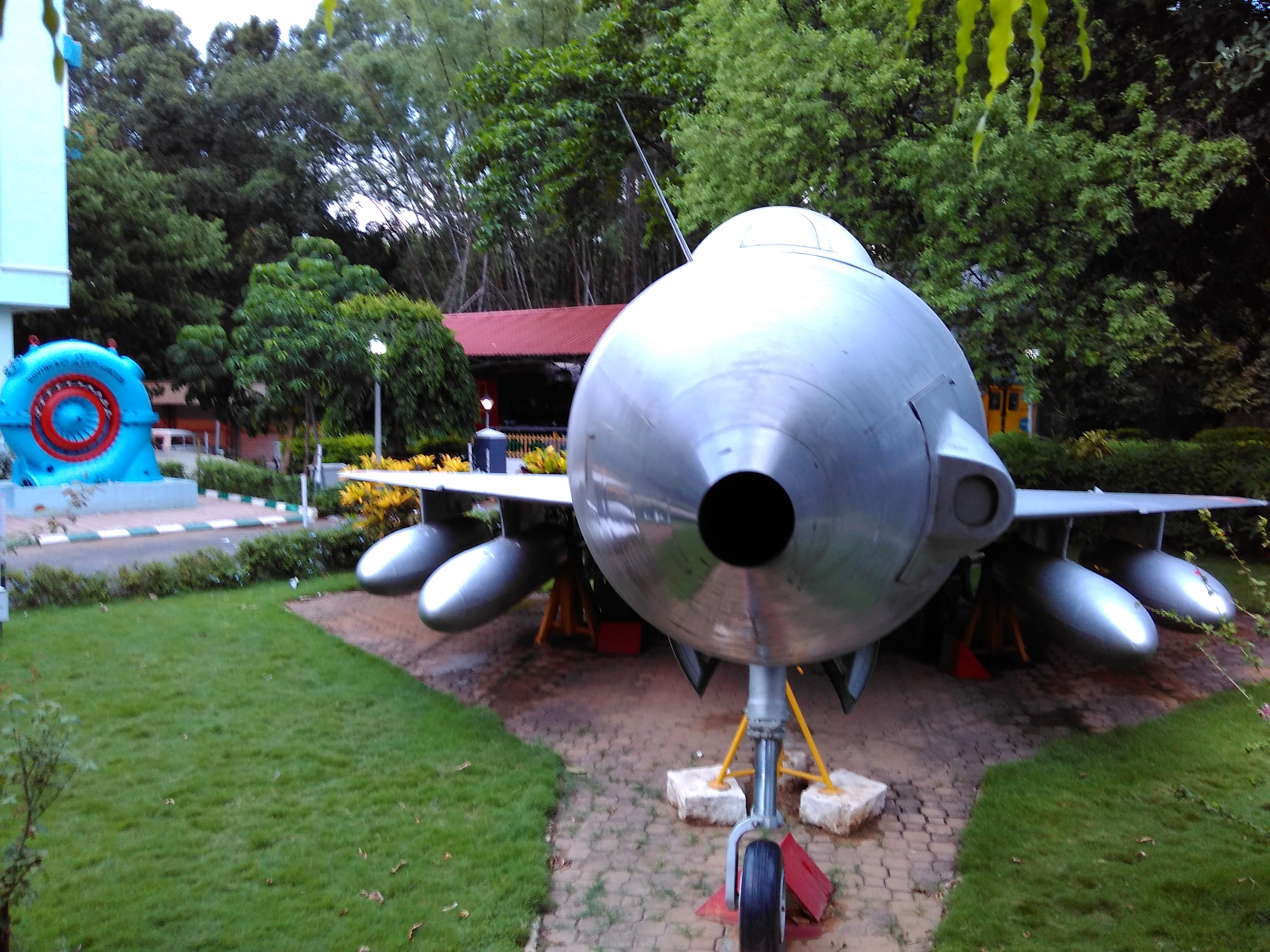 Some of things we saw

When we came out of the museum, we had to go back the way which we came from but fortunately we took the other way and ended up in-front of Chinnaswamy stadium. Talking about the luck, we were completely unaware that the place we have unknowingly arrived is the venue of IPL finals that was about to start in few hours. Well that became apparent instantly given the crowd we witnessed. It went crazier & crazier over time. 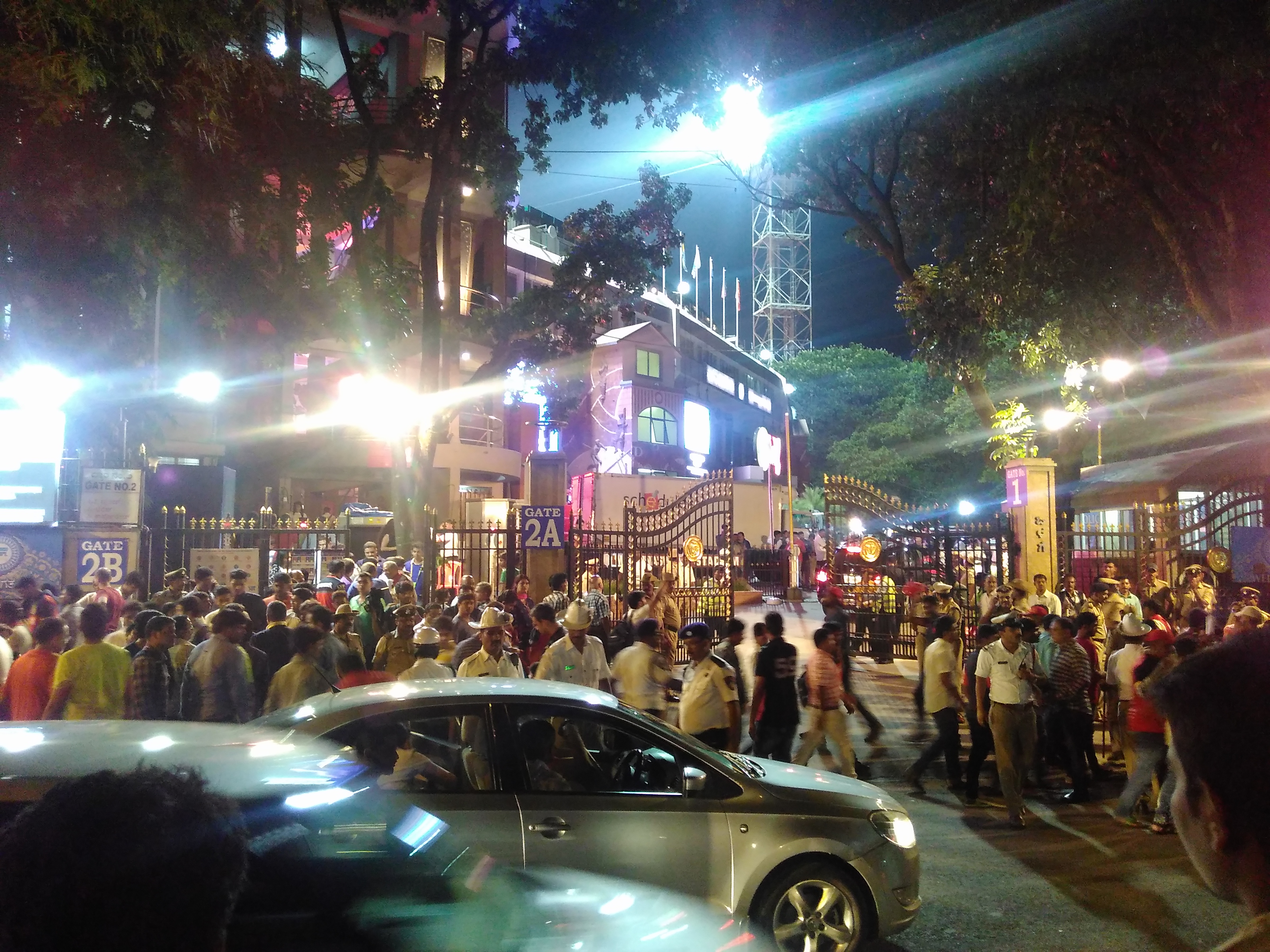 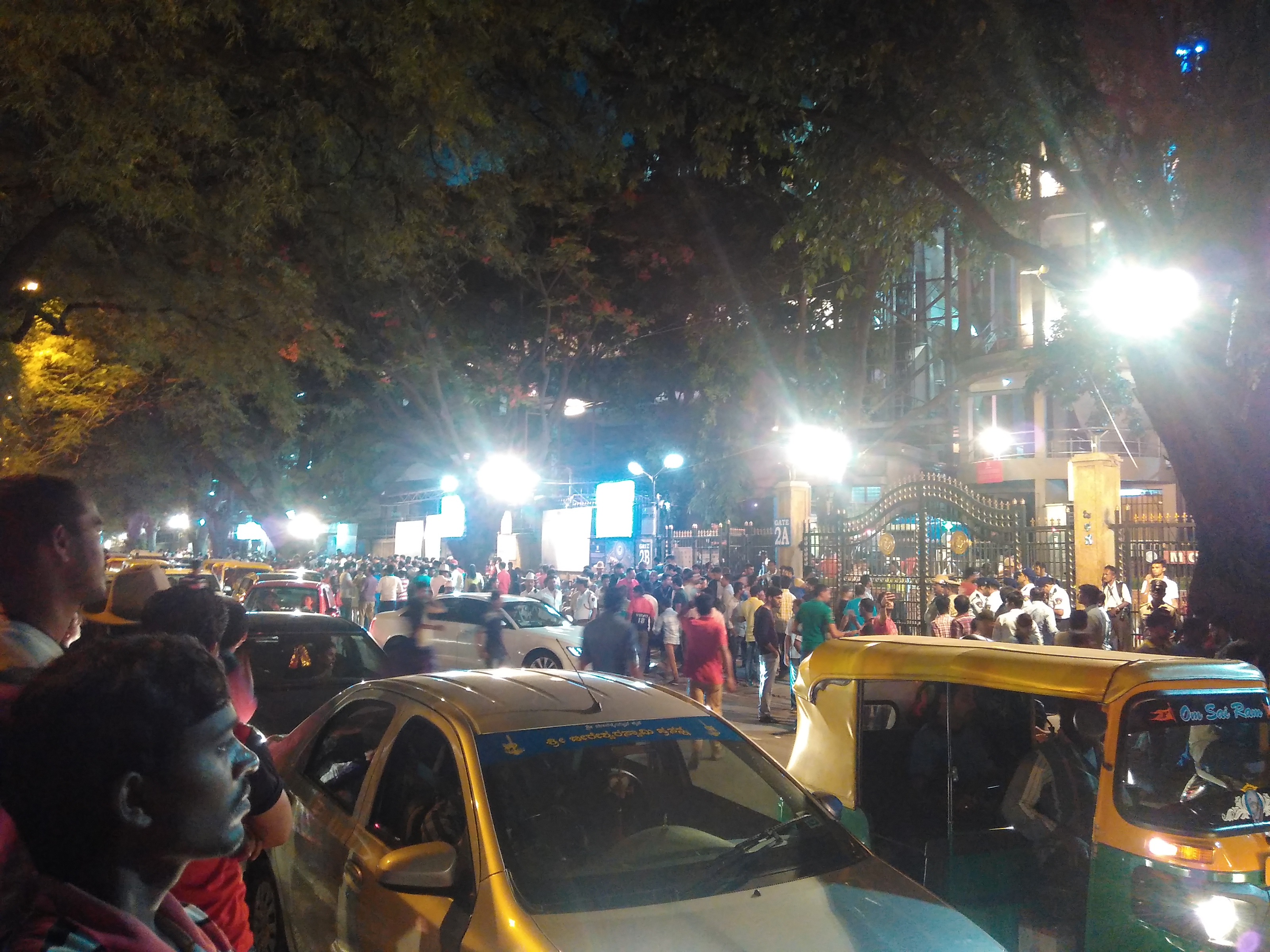 We (actually it was me who was the most excited) kept on roaming around the stadium filming the crowd. For me the match didn't matter as much as my presence there to realize the heated moment. Anyway I'm not that interested in cricket. After I had enough videos, match was well into time and the crowd was somewhat settled, we decided to get back to our room.

Sometimes you catch the moment and sometimes you get caught into it. Suddenly my friend's Google maps stopped working. Mine was already not working anyway - I don't why. It was around 9'o clock night and we were stuck at the Bus stand with ironically no people around. I call it ironic because there was whole crowd gathered a hundered metres away. Fortunately we got into the right bus with a bit of help and reached our destination. 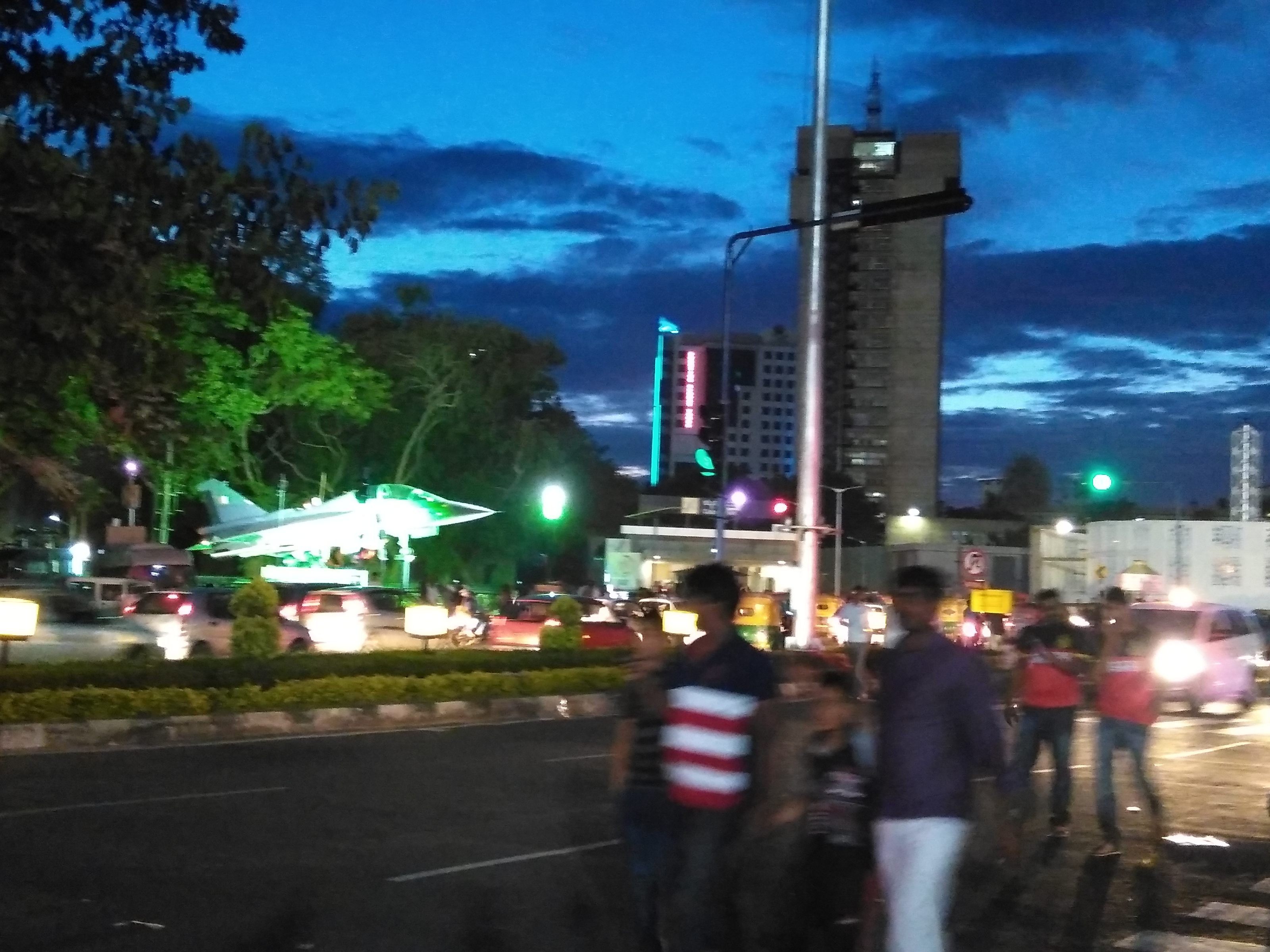 Look at the sky!

One of our colleagues was already there in Hotel. He hasn't come with us because he had to sleep. Hard luck bro!

So when we reached the hotel, we couldn't keep our excitement contained and described the whole game of fate we just witnessed. What he was eagerly watching on TV, we had caught some live actions!

All in one (not even close!)

Night was well settled, beds were cozy and we were obviously tired. So we went to sleep. Tomorrow is going to the big day - the commencement of training at IndioLabs.

It's a new exciting day!

The weather is great and the sunlight is flashing nicely upon our faces. Though sleeping late, I woke quite early in the morning for I have to do a special task. It was really sound sleep given the cozy bed and chilling AC.

Moreover, I just came to know through my wordpress that I've been nominated for 'A lovely blog award' by lovely Sagrika Chugh - yay!

We reached the office relatively early today. The first session went by in ourselves as there wasn't any special session planned. We did have few questions to ask but we thought they needed to be consolidated.

The afternoon session was mostly dedicated to Intellectual Property Right discussion. Right from the basics that what different jargon means to what would happen if someone launches the company with the product same as yours in the different market than for which your company has been registered.

Ma'm was quite compassionate and supportive in answering all of our doubts. She prefers standing while giving the presentation :P The session went for around 2 hours and then we were called to one of the testing labs to see their rigs.

As told by them, the test rig was developed in house (though they procured some of the functional components). The product that was being tested (the biopsy device) is still under development phase and it was one of the crude tests it has to go through in a simulated environment.

Since we have to set the entire lab for scratch, it's more important for us to compile the list of basic things which we have to gather for logistics and inventory. Though we came across one such place, it was more of vague introduction with more focus on the equipment being demonstrated. So we have to prepare the list of items that we can identify - basically dig a little deeper!

We (I was unwilling!) left the office by 6 o'clock after having the discussion with sir for the next day deliverables. We went to Dominos nearby after that and had an usual pizza. Came back, realized we're tired and not in mood to get into the battlefield, I slept for some time and then got up and writing this. My other colleagues are wide asleep :)

It's a lovely day again and I'm fully awake, ready for the tasks that lie ahead.

I woke at around 7:15 AM today. Last night I had finally gotten out of the sleep and wrote the diary at last. We're trying to reach the office at the earliest for we could complete some yesterday's carried-over work.

Breakfast was awesome. We took the bus to work (travelling is really expensive here!) and reached the office at 9:30 AM. We are compiling the list of questions to ask. As said earlier, we have to prepare the exhaustive list of materials to procure for setting up the lab even before we go on to decide which product we would be building.

While coming back from bus yesterday, there was a guy collecting the tickets probably 15 or 16 years of age. His voice was so charming and more it seemed so because Kannada is a beautiful language. Now that I remember that moment, I feel good.

It's been a dull day for there wasn't any planned session for us. It was actually but that's being postponed to Saturday. We went to collect the list of materials to procure for the lab and also talked about some of the problems faced during the set up. I updated the list shared on drive.

The day mostly went in typing tests, Quora and reading some sites to quench the general curiosity.

It was one of the most awesome days in Bangalore!

I visited IKPEden in the morning which is like a pilgrimage for a aspiring hardware entrepreneurs like me. First, we saw the workshop with lots of mechanical and electrical equipments for prototyping. Then we went to the second floor to see more of the incubator and talk to few people there. The amazing thing was the distributed workspace where each table represents one company. People were quite engaged in their work - some brainstorming, some designing and others refining it.